India on the USSR 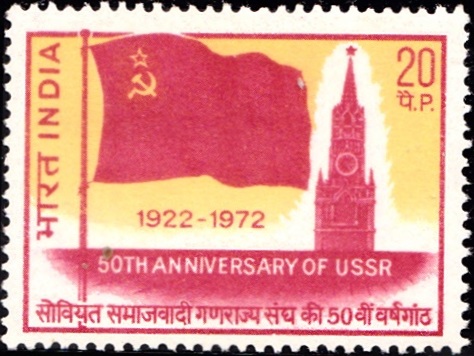 A commemorative postage stamp on the 50th Anniversary of the Union of Soviet Socialist Republics (USSR, Soviet Union), a socialist state in Eurasia existed from 1922 to 1991 :

Issued for : We rejoice with the Soviet peoples on this occasion. The P & T Department considered it a privilege to bring out a stamp to commemorate this glorious event.

Description of Design : The design of the stamp is horizontal and depicts the Flag of the USSR and the Kremlin Tower.

The stamp, designed and printed by the India Security Press, Nasik, depicts the Flag of the USSR and the Kremlin Tower.