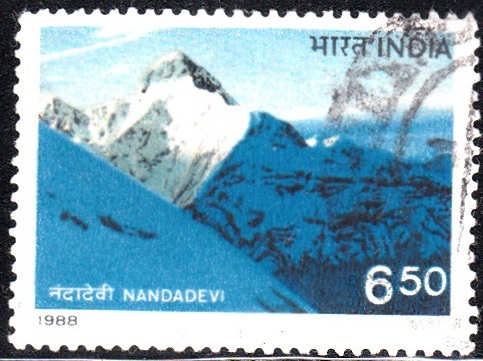 Issued for : The Department of Posts is happy to issue a set of stamps on four Himalayan peaks. K-2 (Godwin Austen) in the Karakorams at 28,251 ft., the second highest peak in the world was scaled in 1954 by Italians under Ardito Desio. The Kanchenjunga (28,208 ft.) the world’s third highest peak was conquered by a British expedition led by Charles Evans who halted within a stone’s throw from the peak in deference to the local religious sentiments. The Nanda Devi (25,646 ft.) was climbed by Bill Tilman and N.E. Odell in 1936. The Broad Peak (26,400 ft.), also in the Karakorams, was scaled in 1957. The Kanchenjunga and the Nanda Devi have also been scaled by Indian expeditions.

Description of Designs : The stamps depict K-2 (Godwin Austen), Kanchenjunga, Nanda Devi and Broad Peak. Shri R.N. Pasricha‘s paintings on the K-2 and the Broad Peak are the basis of two of the stamp designs. Nicholas Roerich‘s painting on the Kanchenjunga was received from Shri Rajeshwar Dayal. The Nanda Devi stamp is based on a photograph by Mandip Singh Soin. The first day cover depicts the introductory lines describing the Himalayas taken from Kalidasa’s ‘Kumarasambhavam’, and the cancellation shows a line drawing of a peak both prepared by Smt. Nenu Gupta.