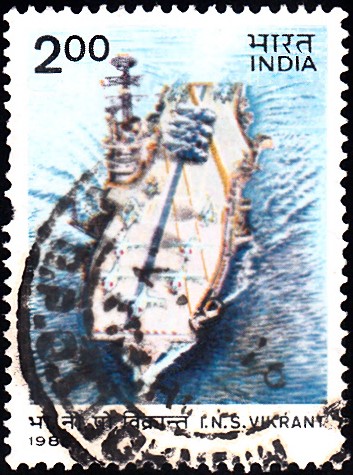 A commemorative postage stamp on the 25th Anniversary of INS Vikrant, a Majestic-class aircraft carrier of Indian Navy :

Issued for : The Department of Post is privileged to issue a commemorative postage stamp on the silver jubilee of INS Vikrant.

Description of Designs : A 200p Stamp of the Silver Jubilee of I.N.S. VIKRANT is based on the art work prepared by Alka Sharma and designed by India Security Press, Nashik Road. The First Day Cover shows a Sea Harrier Aircraft ready for take off with Alize and Seaking Aircraft started upon either side of the deck ready for launch and the crest of I.N.S. VIKRANT superimposed on it. The First Day Cover is based on the transparency courtesy Lieutenant Commander S.S. Gulati.