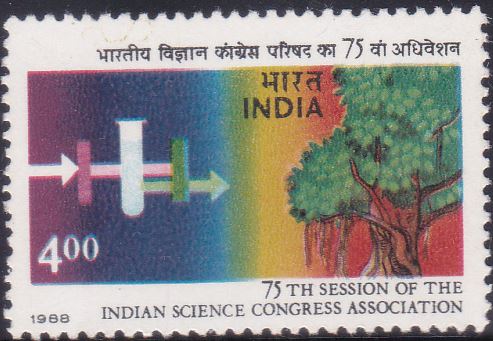 A commemorative postage stamp on the 75th Session of the Indian Science Congress Association (ISCA), a premier scientific organisation at Kolkata, West Bengal :

Issued for : The Deptt. of Posts is privileged to issue a commemorative stamp on the 75th Session of the Science Congress.

Description of Designs : The multi-coloured stamp depicts the experiment of Sir C. V. Raman & K. S. Krishnan who observed with the help of complimentary filters that there were frequencies in the scattered light which were lower than the frequencies in the filtered light. The Bodhi Tree in the stamp represents the universal growth of knowledge in the enlightenment of human beings. The background of the stamp shows the visible spectrum of the sunlight. The design for this stamp has been provided by Indian Science Congress. The first day cover represents the logo of the Indian Science Congress Association. The designs for the first day cover & cancellation are prepared by Shrimati Nenu Bagga.