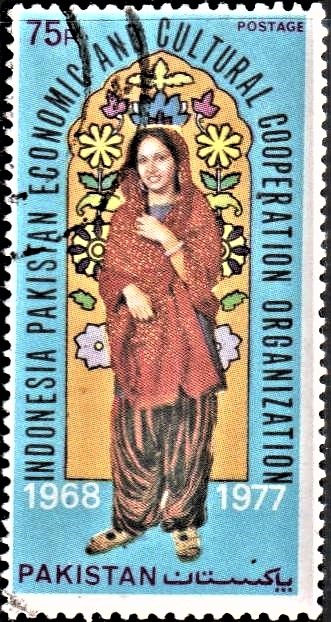 A commemorative postage stamp on the Indonesia–Pakistan Economic and Cultural Cooperation Organisation (IPECC) :

Issued for : To highlight Co-operation between the two countries, the Postal Administrations of Indonesia and Pakistan decided to issue Commemorative Stamps and the theme selected for the stamps was the Traditional Costumes of the capital areas of the two countries i.e. of Jakarta and Rawalpindi–Islamabad regions. Accordingly, Indonesian Postal Administration issued a stamp on IPECC on 19-8-1977, depicting Traditional male Costume of Jakarta Region and Pakistan is issuing its Commemorative Stamp of 75 Paisa denomination on 5th February, 1978 depicting Traditional Costume (Female) of Rawalpindi–Islamabad Region.

Description : A lady in regional costume of Capital Area i.e. Rawalpindi–Islamabad is shown against a floral arch depicted from the fort, which is a monumental representation of our cultural heritage.