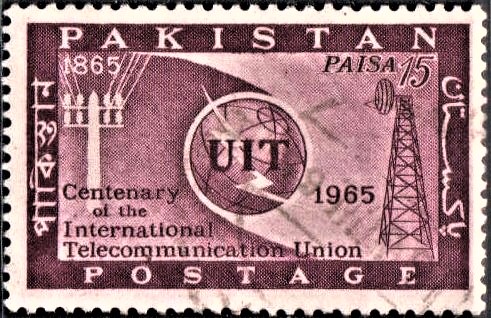 A commemorative postage stamp on the Centenary of the ITU :

Design : The symbol of International Telecommunication Union is shown prominently in the design at the centre. On the right of the symbol a modern transmission tower with date “1965” is shown and on the left the old telegraph pole with date “1865”. The words “Centenary of the International Telecommunication Union” appear on the left hand corner underneath telegraph pole. The denomination “15-Paisa” appears on the top right corner in addition to the words “Postage” and “Pakistan” in Urdu, Bengali and English.