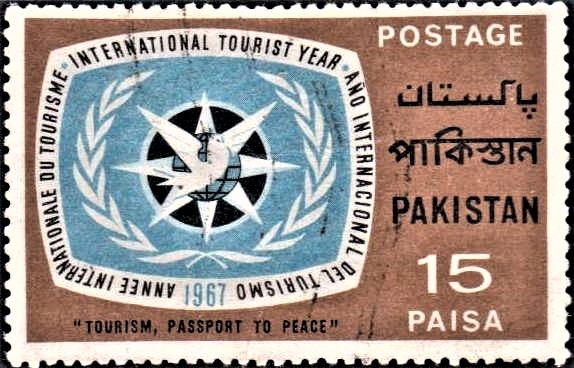 A commemorative postage stamp on the International Tourist Year :

Issued for : There are very few occasions when the United Nations General Assembly puts on record a unanimous vote. The Resolution adopted by the General Assembly on November 4, 1966, designating the Year 1967 as “International Tourist Year” was one of such exceptional occasions. In response thereto Pakistan Post Office is issuing a postage stamp of 15 Paisa denomination on the 1st of January, 1967.

Design : The emblem of International Tourist Year in blue and black is off-set to the left of the stamp. The background of the stamp appears in brown colour. The word “postage” appears at the top and the value “15 Paisa” at the bottom of the background in reverse lettering. The word “Pakistan” in Urdu, English and Bengali appears in black in the centre right of the background between the words “postage” and value “15 Paisa”. The slogan “Tourism, Passport to Peace” appears beneath the International Tourist Year emblem in black.