Canada on Invention of the Telephone 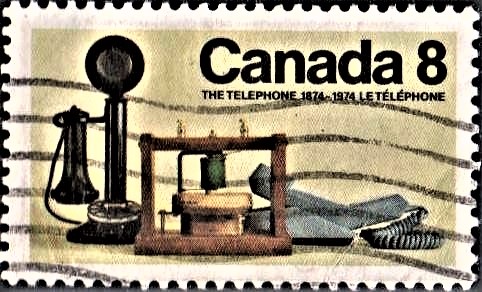 A commemorative postage stamp on the Centenary of the idea for the Telephone by Alexander Graham Bell while visiting Brantford, Canada :

Design : Each of the telephones portrayed in Canada‘s newest postage stamp has a durable place in history. The Gallows Frame was the world’s first telephone. Speaking of it in 1915, Bell said that “The instrument, just as you see it here, was invented in the summer of 1874, during a visit I paid to my father and mother in Brantford….” The Pedestal or “Daffodil” model was very popular and is regarded by many as being symbolic of all telephones. The Contempra Phone was the first to be conceived, designed and manufactured entirely in Canada.

Designed by : Ray Webber of Toronto photographed the three devices.