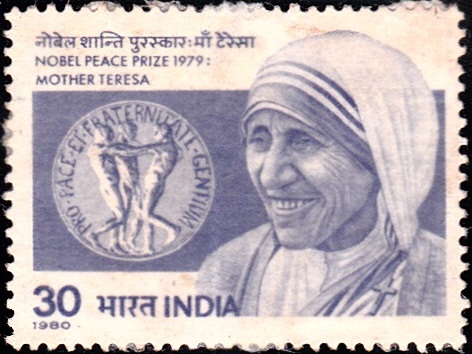 A commemorative postage stamp on Saint Teresa of Calcutta, an Albanian-Indian Roman Catholic nun and missionary :

Issued for : Indian Posts and Telegraphs Department feels honoured to issue a stamp to commemorate the noble work of Mother Teresa and her band of devoted associations.

Description of Design : The stamp carries the portrait of Mother Teresa along with the facsimile of the reverse of the Nobel Peace Prize medallion. The first day cover designed by Charanjit Lal is a collage of her portraits with her message. The cancellation includes a line drawing showing her with a child.