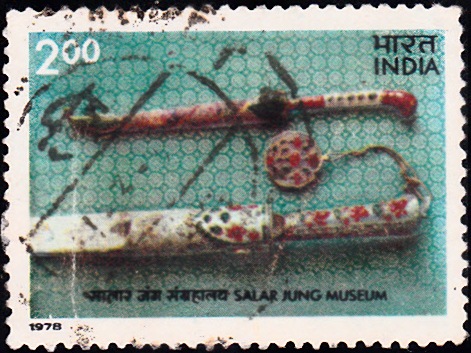 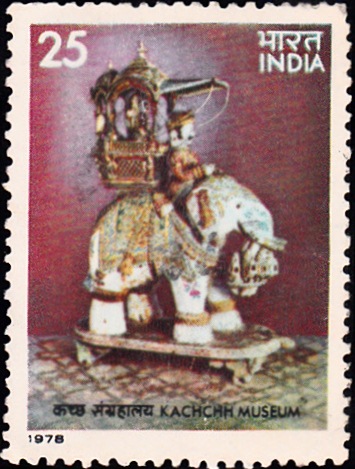 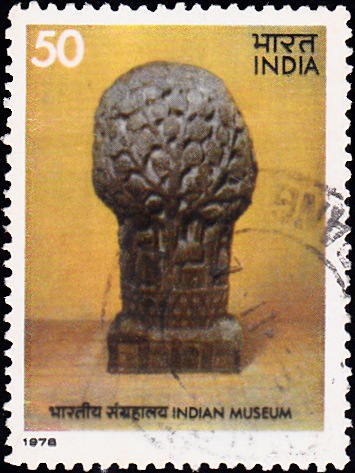 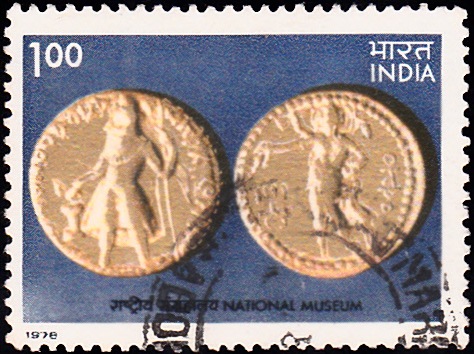 Issued for : In selecting subjects for the series of postage stamps on Museums of India, the Posts and Telegraphs Department has tried to span not only the millennia of Indian history but also a variety of artistic expressions from different regions of the country.

Designs : The 25p stamp depicts the ‘Airavat’ (early 19th century) from the Kachchh Museum, Bhuj. The Airavat is associated with the Vedic Indra as his mount. Indra features in the ancient lore not only of Hinduism but also of Buddhism and Jainism. The figure of this mythological white elephant with seven trunks, mounted on wheels, is from a Jain temple in the Gujarat region, which is well-known for wood carvings and wooden architecture.

The 50p stamp shows ‘Kalpadruma’ in a unique 2nd century B.C. sculpture. Discovered by the great archaeologist, Sir Alexander Cunningham, it was once the capital of a column at Besnagar, Vidisha district in Madhya Pradesh, and is now in the Indian Museum, Calcutta. It is believed to represent the wish-fulfilling tree of ancient tradition offering in profusion all the nidhis – treasures such as sankha – conch shell, padma – lotus, two vases pouring forth coins and four purses with strings tied round their necks. The column, of which this capital was a part, may have adorned a shrine of Kubera, the God of Wealth.

The 100p stamp depicts the two sides of a Kushan gold coin of 1st century A.D. from the National Museum, New Delhi. In the early centuries of Christian era, a branch of the Yueh-Chi tribe from Central Asia, the Kushans, established a powerful line of rulers in North-Western India. The coins of this Dynasty, particularly of Kanishka and Huvishka, have survived in remarkably large numbers and form an important source of their history. The obverse of this coin shows King Kanishka wearing a cloak and helmet. He holds in his right hand an elephant goad and in his left a spear. The inscription reads ‘Shaonano Shao Kanishki Kushano’ (‘Kanishka, the Kushan, King of Kings’). The reverse depicts Lord Shiva with four arms holding respectively a vase, a drum, a trident and an antelope and bears the inscription ‘Oesho’ (‘Shiva’).

The 200p stamp shows two jewellery arms now in the Salar Jung Museum, Hyderabad. The dagger and knife are believed to belong to the Mughal Emperor Jehangir and his consort Nur Jahan respectively. Though there are no inscriptions on the objects to prove their ownership, the arrangement of precious stones and the exquisite workmanship point to Mughal workmanship of the 17th century. The handles of both the dagger and the knife are made of white jade encrusted with flowers of ruby and leaves of emerald. The pendant attached to the dagger is shaped as a flower in white jade and encrusted with floral motif carved out of rubies and emeralds.