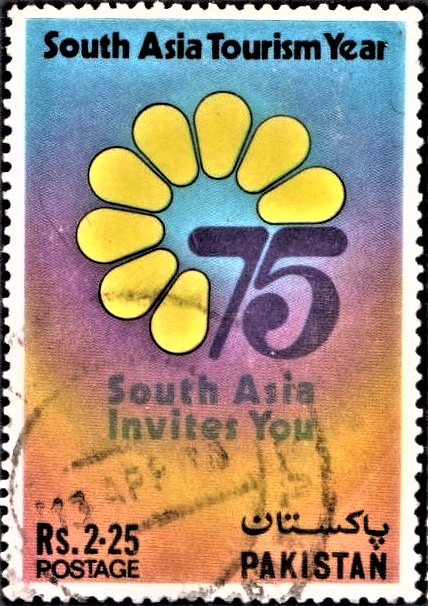 Design : Stamp is vertical in format. Against a colourful background of blue, indigo, purple, red and orange appears the South Asia Tourism Year motif at the upper portion of the stamp. The variation of colour from a cool one (blue) to warm (red) represents not only the various climates but also the rich cultural variety of the South Asia. The petals of Sun-Flower of the motif is dark yellow while the figure ’75’ indicating the year is dark mauve colour. The caption ‘South Asia Tourism Year’ is placed at the top in black while the slogan ‘South Asia Invites You’ appears in green colour below the motif. ‘Pakistan‘ in Urdu and English together appear in the lower right corner while denomination ‘Rs. 2.25’ with the word ‘postage’ appear in the lower left corner also in black.