Pakistan on Coronation of Shahinshah Aryamehr & Farah Pahlavi of Iran 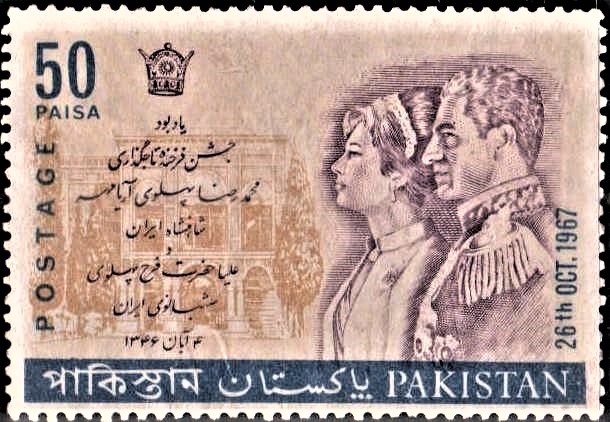 A commemorative postage stamp on the Coronation of Shah Mohammed Riza Pahlavi and Empress Farah of Iran :

Issued for : To commemorate and perpetuate the memorable event of the coronation of His Imperial Majesty Mohammad Reza Pahlavi, Aryamehr Shahinshah of Iran and Her Imperial Majesty Empress Farah Pahlavi being held on the 26th October, 1967, the Pakistan Post Office is issuing a stamp on that date. The ceremonies would be held at the Gulistan Palace, Tehran and an official proclamation declaring his Imperial Highness Crown Prince Reza as heir to the Iranian throne would also be made the same day. In Pakistan, we are fully conscious of the significance of this coronation and we all fully share the rejoicings of our Iranian brethren, on this auspicious occasion.

The commemorative postage stamp would bear the portraits of Their Imperial Majesties with the Gulistan Palace in the background and would be superscribed with the following inscription in Persian. Its translation is also given below.

Design : The profile portraits of Their Imperial Majesties the Shahinshah and the Empress of Iran appear at the right of stamp. To the left of the portraits appears the Persian text surmounted by the Imperial Crown. The portraits, Imperial Crown and Persian text are printed by Intaglio process in purple, Gulistan Palace appears in orange as background. The word “Pakistan” in Bengali, Urdu and English appears in reverse in the blue panel at the bottom. Above the panel the word “Postage” and the date of Coronation “26th October, 1967” printed vertically in blue, appear at the left and right sides respectively of the stamp. The denomination “50 Paisa” appears in top left corner printed in Blue.

Process of Printing : One Colour Intaglio and two Colours Litho