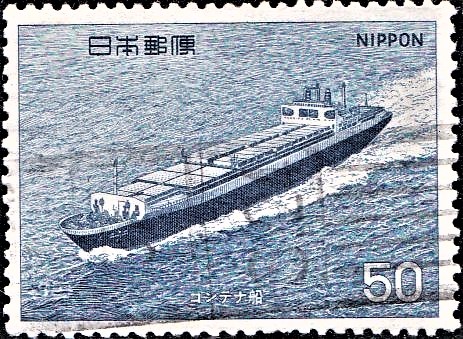 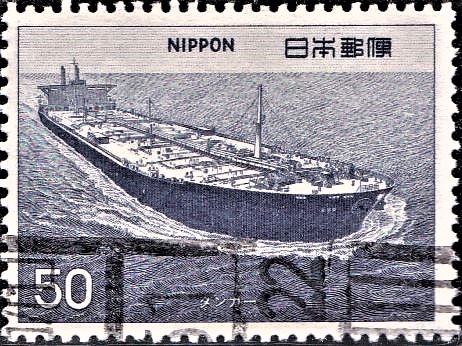 Issued for : As the 6th (last) of the Ship Series, two 50 yen postage stamps (se-tenant) will be issued featuring respectively a container ship and a tanker.

Picture : CONTAINER SHIP: To cope with circulation of merchandise on world-wide scale, the marine transportation has come to seek after efficiency and rationalization. The container ship made its debut to meet the requirements of the times. In 1967 for the first time in the world, America put a container ship in service on the Pacific run while “Hakone-maru”, the first container ship in Japan, constructed by the Nippon Yusen Kaisha, entered service on North America West Coast run in 1968. Later, the container system has been put in practice on the Australian and then the European lines and at present about 40 vessels are in service in the world. Those of 50,000 ton class in the gross tonnage run at 26-27 knots (the highest speed is 30 knots), able to carry 1,8000 containers.

TANKER: Japan consumes about three hundred million kilolitres of petroleum in a year, 99% of which is imported from the Middle and Near East countries and Indonesia. To Transport the crude oil in large quantity by sea the tankers have become large-sized and their number has increased. Carrying quantities of oil at a time the gigantic tanker has contributed to reduce the transportation expense. At last in June 1975 the Nissei-maru, the dead-weight of which is 480,000 tons, made its debut. The tanker as well as the container ship represents the contemporary Japanese shipping.