India on International Union of Railways 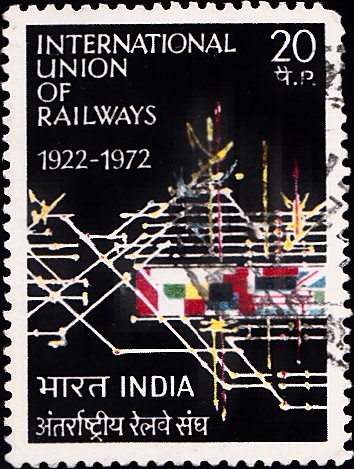 A commemorative postage stamp on the 50th Anniversary of the International Union of Railways (U.I.C.), an international rail transport industry body :

Issued for : The Indian Posts & Telegraphs Department feel privileged in bringing out a commemorative stamp to mark the golden jubilee of the International Union of Railways.

Description of Design : The design depicts a track layout of a Railway yard wired for electric traction with its control offices and other allied operation facilities.

The stamp design is based on an art work by the well-known French artist George Mathieu. Famous as the promoter of Lyrical Abstraction of art free from all classical restrictions and customs, Mathieu has held exhibitions of his work in many countries. He is also the innovator of Tachism and has specialised in tapestry and porcelain designs.