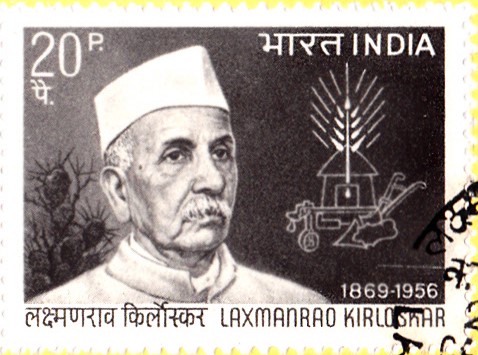 A commemorative postage stamp on the Birth Centenary of Laxmanrao Kirloskar, an Indian businessman, founder of the Kirloskar Group :

Issued for : The Posts and Telegraphs Department joins hands with modern industrial India to pay its tribute to this great son of India, Shri Laxmanrao Kirloskar – pioneer, industrialist, patriot and social reformer.

Description of Design : The design of the Stamp is horizontal and depicts a portrait of late Shri Laxmanrao Kirloskar. A mechanised plough with the depiction of a hut and an ear of corn is shown at the right side.