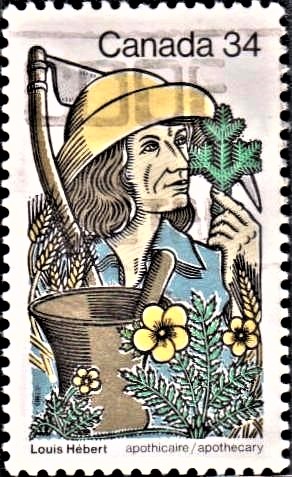 About the Stamp Design : The stamp, by Montreal graphic designer Clermont Malenfant, illustrates Louis Hébert surrounded by objects relating to his life and work in the Quebec colony. The spring of balsam fir in his hand and the silverweed, both useful as herbal medicines, together with the mortar and pestle, symbolize his craft as an apothecary. With wheat and scythe, Hébert was able to provide the small colony with a store of food for the long winter months.