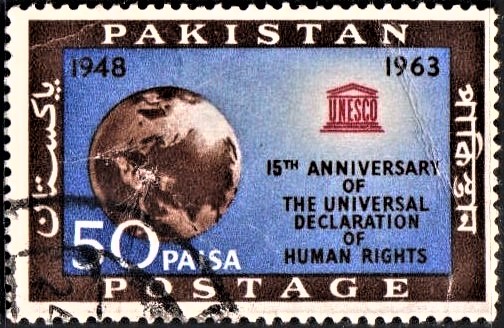 A commemorative postage stamp on the 15th Anniversary of the Universal Declaration of Human Rights (UDHR) :

Issued for : December 10, 1963 marks the 15th Anniversary of the adoption of the “Universal Declaration of Human Rights”. To commemorate this important event, Pakistan Post Office is, along with a number of other countries, bringing out a postage stamp of 50-Paisa denomination.

Design : Has been designed by the Pakistan Security Printing Corporation Limited, Karachi under the guidance of the Ministry of Communications (Post Office), Government of Pakistan. The commemorative in question shows among other things a brown border including the wording ‘Pakistan Postage’ in white surrounding the blue background interior of the stamp. A global representation of the world, printed in brown appears on the left hand side of the stamp with the denomination underneath in the bottom left hand corner. The UNESCO symbol, printed in red, is shown in the top right hand quarter of the stamp, the blue background having been shaded to white behind it so as to give it greater prominence. The commemorative title is printed in brown in the bottom right hand quarter of the stamp.