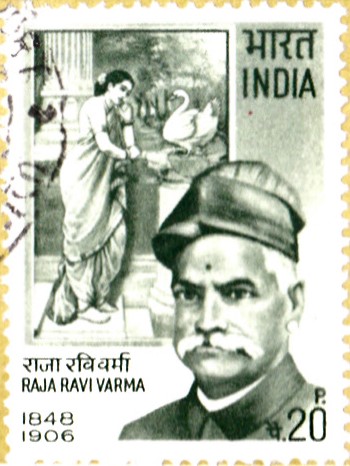 A commemorative postage stamp on the 123rd Birth Anniversary of Raja Ravi Verma (Koil Thampuran of Kilimanoor), the Father of Modern Indian Art :

Issued for : The Posts and Telegraphs Department is happy to bring out a special commemorative stamp in honour of Raja Ravi Varma, the great Indian artist on the occasion of his 123rd birth anniversary. The stamp depicts one of his famous paintings ‘Damayanti and the Swan‘ along with the portrait of the artist.

Description of Design : The design of the stamp is vertical and depicts one of the famous paintings ‘Damayanti and the Swan‘ of the artist Raja Ravi Varma along with his portrait.