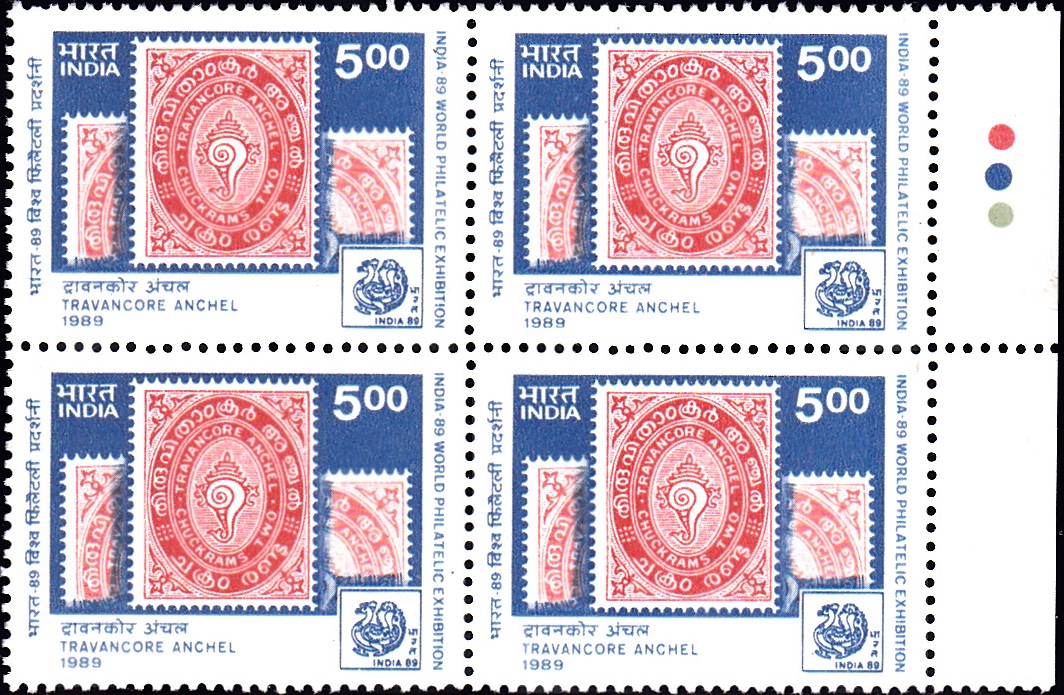 Complete Set of 4 nos of postage stamps on the ‘India 89’ World Philatelic Exhibition : 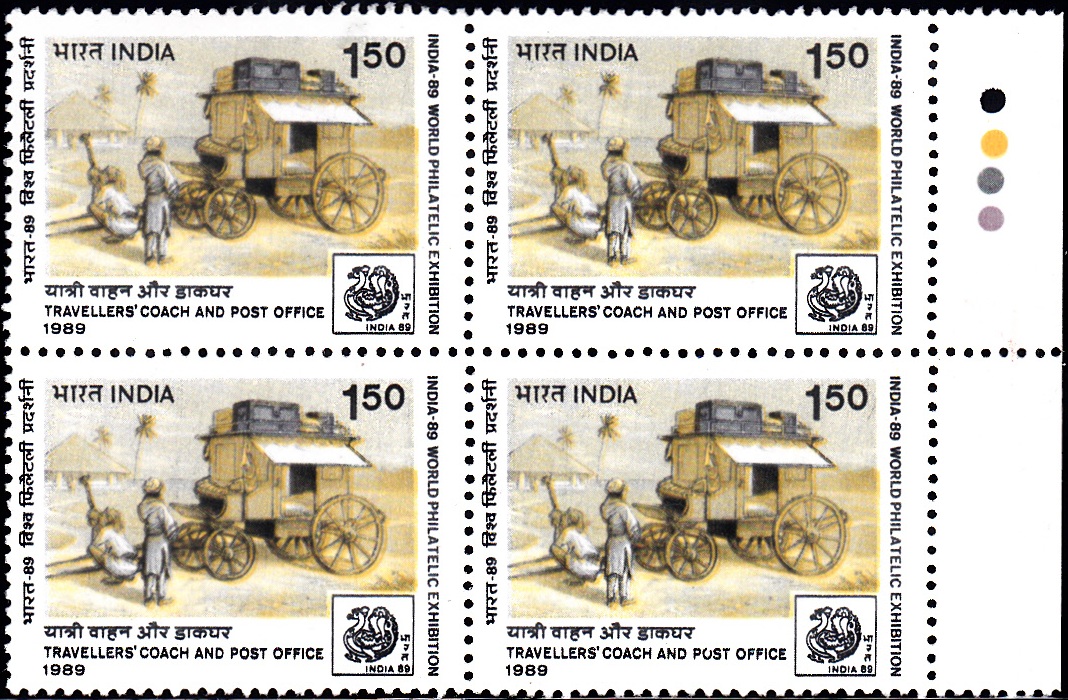 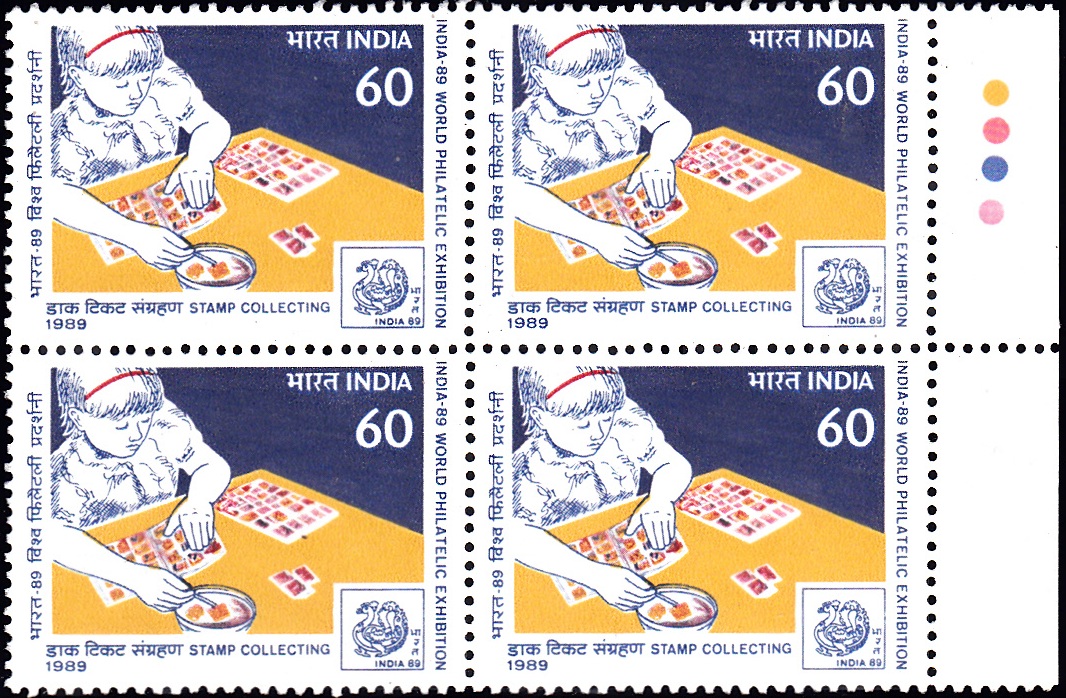 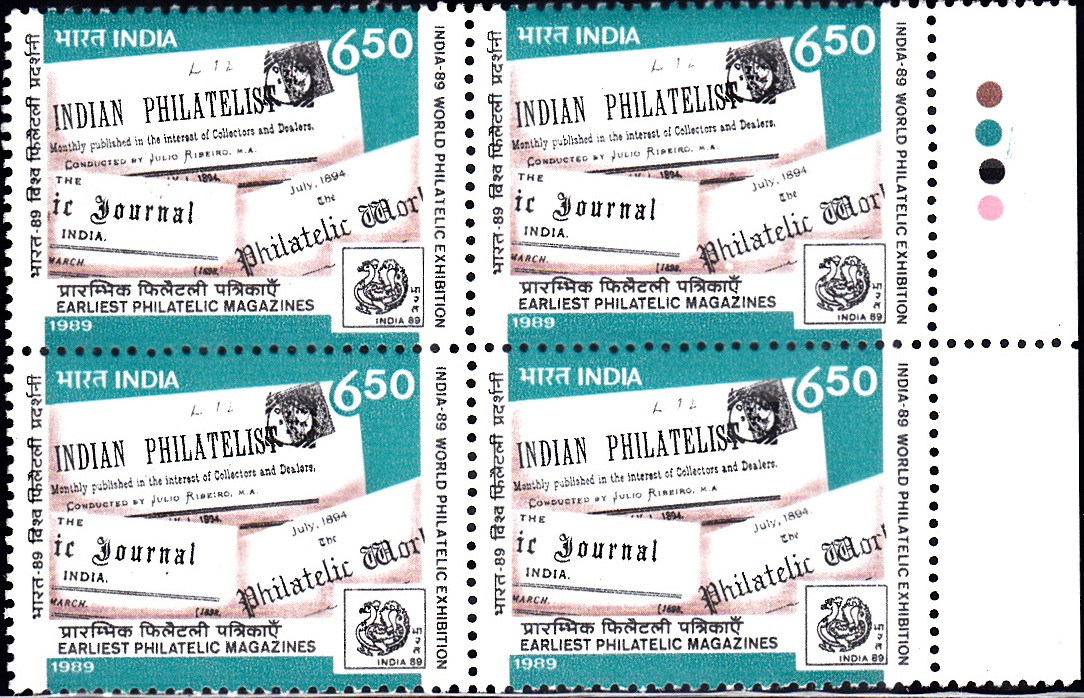 Issued for : As a prelude to India 89 World Philatelic Exhibition the Department of Posts has issued four sets of stamps in 1987 and 1988. Today, as the exhibition opens, the Department is issuing a set of four stamps.

Design :
(i) The first stamp is on stamp collecting, a hobby requiring very little introduction. The hobby must have begun soon after issue of the Penny Black (1840). Confined initially to school-boys and enthusiasts, by 1863 it had attracted serious interest. People find in stamps, apart from their illustrative and pictorial value, sufficient interest to justify the study of their specialities. Each design’s history was worth tracing through various mutations of shade, paper, watermark and perforation. Thus stamp collecting moved towards a systematic study and grouping of stamps. It also acquired a new name, ‘Philately‘ (Greek ‘Philos’ meaning ‘fond of’ and ‘Atelia’ meaning ‘exempt from tax’.

(ii) The second stamp shows a Traveller’s Coach and Post Office, better known as Dawk Gharee (mailcart). The first wheeled cart was used in 1841 in Meerut by one Mr. Smith. Thereafter post offices hired wheel carts. In 1842, the service was introduced between “Mynpooree“ and “Allyghur“ and later from Aligarh to Delhi and Meerut. The illustrated Dawk Gharree belonged to Mr. Beacon of M/s. Greenway and Company, Calcutta. The Company held a license to carry the Royal Mail/Foreign Mail between Calcutta, Diamond Harbour and Barrackpore. They also carried mail and passengers on the Calcutta–Banaras–Patna route. The coachman announced his approach whirling his bell-studded whip and sounding his bugle. (Design for stamp and text courtesy Manik Jain, who has drawn on G.F. Atkinson‘s “The Ingredients of Social life in India“ and William Carey‘s “The Good Old Days of John Company“).

(iii) The third is a reproduction of the Travancore Anchel Stamp of 2 Chuckrams denomination. The former Indian Sate of Travancore had an independent postal or Anchal System with a mail transport service including a boat mail service and the Railway Anchel Service. The first adhesive Anchel Stamp was introduced on 16.10.1888 in denominations of 1, 2 & 4 Chuckrams (1 Chuckram = 3.57 paise) in ultramarine, red and green printed on laid paper bearing a large sheet watermark showing a conch shell surmounted by “GOVERNMENT” in an arch with “OF TRAVANCORE” below in a straight line. These were the earliest feudatory stamps surviving till 1953.

(Text based on material in publication “The Travancore Anchal” by Dr. N.S. Moos; Anchel Stamp courtesy by PMG, Kerala Circle).

(iv) The fourth stamp depicts Early Philatelic Magazines. Philatelic literature, especially periodicals, played a vital role in disseminating news and information and bringing together philatelists. A few early efforts, such magazines as “The Philatelic World“ and “The Indian Philatelists“, both started in 1894, were short lived. ‘The Philatelic Journal of India‘, issued by the Philatelic Society of India, was first published at Calcutta in 1897 and is still current. ‘India’s Stamp Journal‘ has seen over 50 years of publication and ‘Signet‘ and ‘Ind Dak‘, a decade. Other magazines like ‘Top Phil‘, ‘Stamp World‘, ‘Digest‘, etc. are steadily contributing their efforts to Philately. The stamp depicts the mast heads of some of the early philatelic magazines. (Text courtesy Dhirubhai Mehta, Material for stamp G.B. Pai).