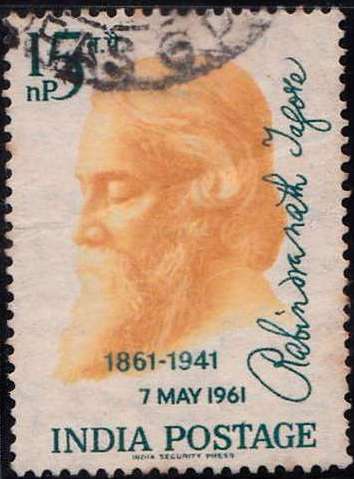 A commemorative postage stamp on the Birth Centenary of Kabiguru Rabindranath Thakur, 1st non-European to win Nobel Prize in Literature in 1913 :

Issued for : In 1952, the Posts and Telegraphs Department brought out the first photogravure series of stamps depicting Saints and Poets which included Rabindranath Tagore. The Department deems it a great privilege to pay its tribute to this great Poet of India once again by issuing a special stamp commemorating his birth centenary.

Design : The stamp which carries the profile of Rabindranath Tagore is based on a design by Satyajit Ray and is executed by the India Security Press, Nasik.

Acknowledgements are due also to the Vice-Chancellor, Vishwa-Bharati, for kind permission to use the profile from a photograph.

Watermark : All over multiple “Lion Capital of Asoka”