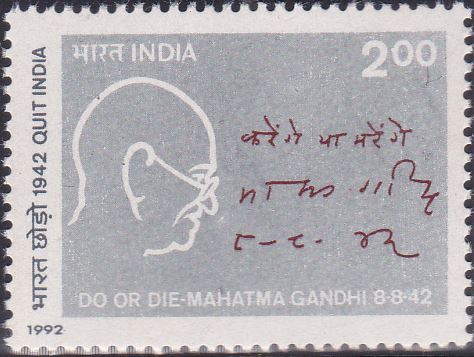 Complete Set of 2 nos of postage stamps on the Golden Jubilee of the Quit India 1942, a movement Mahatma Gandhi demanding an end to British Rule in India : 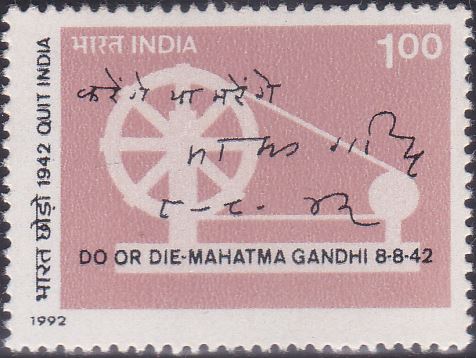 Issued for : The Department of Posts is privileged to issue two special postage stamps to commemorate the 50th anniversary of the ‘QUIT INDIA MOVEMENT’.

The First Day Cover design is a reproduction of the inscription on the Gandhi Memorial Stambh (Column). The inscription on the Stambh is in Marathi and Hindi and reads as follows:–
“Under the unique leadership of Mahatma Gandhi, the Meeting of All India Congress Committee was held on 7th and 8th August, 1942 and the historic resolution entitled ‘QUIT INDIA’ was passed. A clarion call was given to every Indian with the slogan ‘DO OR DIE’. This column has been dedicated to the nation by Gandhi Smarak Nidhi and Municipal Corporation of Greater Bombay.”